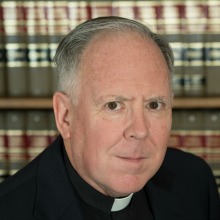 We continue to speak with the Deans of law schools across the region, and recently, we posed several questions to the Reverend Lawrence W. Moore, Interim Dean for the Loyola University New Orleans College of Law.

After obtaining his undergraduate degree in Philosophy and Classics from St. Louis University, Rev. Moore went on to obtain Master degrees in Urban Affairs and Divinity before earning his Juris Doctor degree from the University of Missouri at Kansas City School of Law.

Immediately following the receipt of his J.D., he went on to earn his Master of Laws degree from New York University School of Law.

He has been a law professor for more than 30 years, becoming an Assistant Professor of Law at Loyola University New Orleans College of Law in 1982.

One of the first things we ask all law deans in our interview series is what they believe to be the biggest challenge facing new law students. Rev. Moore, like several other deans, acknowledges the difficulty many students have in adapting to the demands of a professional curriculum. He writes that the challenge is “[t]he same as the past several generations, adjusting to the greater demands of law school—the level of preparation, engaging in active learning in class and not putting off review until the end of the semester. I would add that law students need to start planning career development earlier in their law school career.”

Active learning and career planning are two themes we continue to see the law deans address. No longer is a legal education simply rote learning—it is active, engaging practice to learn real-world skills.

As for his own challenges as dean, Rev. Moore points to budget cuts and declining enrollment. Loyola University New Orleans College of Law is already a small law school, which Father Moore counts as an asset for the program: “Being the biggest has never been one of our goals. We want to be the right-sized school for students looking for a more personal approach to their education. The manageable size of the college allows our dedicated faculty and staff to take an active role in each student’s education, giving them the time and attention they need.” Despite the school’s small size, he says, the program offers diverse learning opportunities that rival larger law schools.

As far as educational practices go, Rev. Moore cites a changing student population for prompting changes in instructional methods. When asked how teaching law now is different from when he himself was a law student, he replied, “There was not much pushback against cold calling students and engaging in a dialogue when I was a student. Today many students refuse to engage in such traditional practices.” Instead, many students today prefer a hands-on approach through interactive learning and practicum, rather than traditional Socratic method.

Like other deans we have interviewed, Rev. Moore thinks that health care law is the area of law that will see the biggest growth in the coming years. This is not surprising given the changes to the health care system during the current presidential administration and the increased access to health care.

We asked Father Moore what he believes is the biggest challenge facing the United States Supreme Court. He addressed a public misconception that “the Supreme Court [is] simply another political branch of government where partisan conflicts are resolved.” Instead, he says, people need to recognize that “[t]he Court is political, but is should also operate as a court with precedents and principals.”

If Rev. Moore were to invite any three legal entities—real or fictional, living or dead—to a meal, he would select John Marshall and his grandson John Marshall Harlan and Sandra Day O’Connor. The discussion among these Justices from different eras would likely reveal an interesting change in interpretation of the United States Constitution over the decades.

Like others, Father Moore points to the classic To Kill a Mockingbird as his favorite legal film.