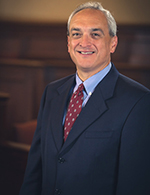 Regent University School of Law in Virginia Beach, Virginia, was established in 1986, and in just 30 short years, has grown to be recognized as having a faculty ranked among the top 10 American law school faculties. Regent Law is unique in providing a legal education with a Christian perspective, and its Honors Program boasts a 92.3 percent first-time bar passage rate. Its moot court program ranks 5th in the nation, and in 2015, Regent Law ranked in the top 25 percent of all law schools for graduates obtaining judicial clerkships.

In 1992, Michael V. Hernandez joined the faculty at Regent Law, where he has taught courses including Appellate Advocacy, Advanced Appellate Advocacy, Christian Foundations of Law, International Human Rights, Property, and Race & the Law. He served as the director of the LL.M. in American Legal Studies degree program, the director of the Honors Program, faculty advisor to the Moot Court Board and to the Hispanic Law Students Association, and as the head coach of Regent's award-winning Moot Court teams prior to becoming Dean of Regent University School of Law in 2015.

As Dean, he works with a distinguished and nationally-recognized law faculty that includes includes former United States Attorney General John Ashcroft and the Chief Counsel of the American Center for Law and Justice, Dr. Jay Sekulow.

As part of our continuing Law Deans series, criminal defense attorney Adam R. Banner asked Dean Hernandez for his perspective and insight into legal education and the changing face of the legal profession.

I understand this question in two ways. Regarding the adjustment to law school, the first year traditionally has been, and remains, the most difficult academic experience for the majority of students. At all law schools, the challenge involves learning how to engage and master the law analytically and strategically—to "think like a lawyer." At Regent, we challenge our students to develop these analytical skills without losing, and indeed while strengthening, their moral compass. Regarding the unique challenges law students face today, the legal education and job markets are in flux, facing typical modern economic disruptions. The challenge for all new law students will be to develop the substantive knowledge and analytical and practical skills necessary to be excellent attorneys while also being equipped to thrive in the modern economy.

Maintaining and building Regent Law's distinctive Christian mission and commitment to academic excellence while adapting to the disrupted legal education and job markets.

In terms of practice growth, the intersection of technology and the law—computer law, cybersecurity, and related fields. In terms of substantive prominence, religious liberty issues. Fundamental challenges to the principles of freedom upon which this nation was founded and the theological and jurisprudential presuppositions upon which those principles were established are on the immediate horizon and will be at the forefront of upcoming legal disputes.

Yes and no. Aspects of excellent law teaching—inspiring students to dig deep, develop analytical skills, and master material with guidance from, rather than complete dependence on, the instructor—are timeless, and the essential art of learning the law has not changed. However, technology has profoundly impacted education. The current generation of students is much more visually oriented and spatially aware—but also potentially distracted—than earlier generations were. Like most attributes, these are both strengths and weaknesses. In living out the Golden Rule, we must balance challenging students to grow while we enter their world; in other words, we must develop their skills and play to their strengths but not cater to their weaknesses.

Technology already has profoundly impacted criminal law in both good and bad ways. Improved technology has increased the certainty of guilt and exonerated the innocent. Technological advances will continue to have this positive impact. On the negative side, jurors often have unrealistic expectations of the availability of definitive scientific evidence and thus the ability of the prosecution to pinpoint guilt. This "CSI effect" arguably has created a de facto "beyond any doubt" standard in many criminal cases. Although that heightened standard will lead to fewer improper convictions, it is unworkable in an imperfect world and will also lead to the exoneration of many culprits who should be convicted.

The most important legal challenge will be, as I noted above, determining whether to maintain an unshakable commitment to the principles of freedom, most notably religious liberty, upon which this nation was founded. The Court's biggest general challenge will be to maintain its legitimacy while properly and fairly adjudicating disputes in a non-political way. The Court usually meets this standard but often fails to do so in highly publicized cases. The Constitution does not establish a federal judiciary of general jurisdiction, and thus the Supreme Court is not the highest court in the land on all legal issues. Instead, the federal government, including the federal judiciary, has limited, specified supreme powers, with most matters left to state and local authorities and tribunals. Many justices, on both the right and left, adjudicate disputes as if they had comprehensive common law authority, leaving our nation governed by the dictates of five unelected and largely unaccountable individuals. This approach is antithetical to the representative and balanced form of government our Constitution establishes and the principle of subsidiarity essential to liberty and good governance.

I litigated for five years before I joined the faculty at Regent Law. I miss the challenge and thrill of strategizing and crafting legal arguments on behalf of real clients. I have, however, been able to put those skills to good use, both as Dean and also previously through my work with our moot court program, which I am pleased to note ranked fifth among all U.S. law schools in 2015-16.

Moses, James Madison, and Thomas Jefferson. Moses because he was the first "law giver" and judge, his personal story is fascinating, and I would enjoy discussing the substance and modern significance of principles embedded in the Decalogue and the Torah. James Madison, because he was the primary drafter of our Constitution, a brilliant legal mind, and the preeminent defender of religious liberty in our nation, if not in all human history. Thomas Jefferson, because I am a "double 'Hoo" (B.A. and J.A., University of Virginia), and I would like to discuss his views of federalism and the metaphorical "wall" he employed in his letter to the Danbury Baptists. (Dr. Dan Dreisbach has demonstrated from detailed and scholarly historical analysis that Mr. Jefferson meant the wall to protect the church from the state, not the public square from religious influences.)

For me, this is the most difficult question you have asked, because I am not a movie aficionado, and I tend to be distracted by unrealistic movie court scenes, which are unfortunately quite common. The most iconic movie courtroom scene is Tom Cruise confronting Jack Nicholson in A Few Good Men. The most fun movie that includes an important courtroom scene is Miracle on 34th Street (1947 version, of course). The most important legal movie is To Kill A Mockingbird.