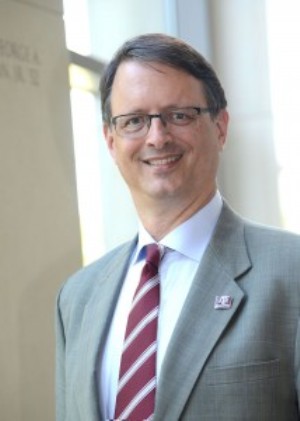 In 2013, Texas A&M University acquired the Texas Wesleyan University School of Law in Fort Worth, Texas. Today, Texas A&M University School of Law is fully accredited by the American Bar Association (Council of the ABA Section of Legal Education and Admissions to the Bar) and is a member of the Association of American Law Schools (AALS). The Texas A&M law school boasts 38 full-time professors and several adjunct and visiting professors serving and educating 750 full-time and part-time law students.

As I have been reaching out to law school deans around the region, Dean Morriss took the time to answer several questions about the challenges law school students face, the nature of legal education, and the future of the legal profession.

What do you think are the biggest challenges facing new law students?

There are two. One is a familiar one, which is for you as a student to adapt to a really different style of classroom experience and class preparation, at the same time you are thrown in with a quite accomplished group of peers. That’s always been tough. But the added challenge today is that students need to be much more proactive about getting a job when they graduate, from the moment they start law school. You’ve got to think that your job from day 1 of law school is to get a job – and that means taking full advantage of all the resources your school has to offer, going to career panels, working on your resume with career services, hustling for externships, and so on. It is no longer enough to just go to class and study a lot.

Which areas of the law do you think will experience the biggest growth?

I think it is not so much particular areas that will grow – although I would bet that intellectual property will grow – as an entrepreneurial mindset that will be in greater demand. I think Richard Susskind is on to something in Tomorrow’s Lawyers when he talks about the types of pressures the legal profession is under. I’d summarize Susskind’s point as that the really important thing for a successful career is going to be an ability to spot opportunities to add value and get to them before the skills get turned into a commodity. It is also going to be about the ability to adapt to new research tools. FastCase is offering graphical legal research tools, Thompson Reuters is marketing big data tools for lawyers, and there seems to be a major new way to think about legal research appearing once a month. A major firm librarian told an audience at the American Association of Law Schools conference in January that her firm’s partners were looking to new associates to bring understanding of these tools to the workplace. Being known as someone who can find and apply the relevant tools is already a huge thing for law students.

What are the biggest challenges you face as Dean?

My biggest challenge is managing the rapid influx of resources. Texas A&M acquired our school in 2013 and has really been investing heavily in us. We hired 11 new faculty this year, including 9 senior hires. Integrating all those new people – and finding space for them while we work on a new building – while making all the great possibilities we’ve got to work with on our main campus is a real challenge. For example, we’ve got an amazing forensics department that offers some great training that our criminal law students will love, terrific opportunities to collaborate on IP with the College of Engineering, agricultural law collaborations possible with the College of Agriculture, national security opportunities with the Bush School, and many more. It is like going in to an amazing buffet and not knowing where to start! But keeping all those things developing takes a lot of effort by everyone.

How is teaching law now different compared to when you were a law student?

I went to law school in the early 1980s at the University of Texas at Austin, where I got an absolutely terrific legal education at a bargain price. I think the biggest difference today is that there is a much greater emphasis on group work. When I was in law school we rarely collaborated on anything beyond class outlines. Today, lawyers want to hire law graduates who know how to work in teams to solve problems. As a result, law schools need to give students a chance to demonstrate to employers that they can do that.

How is the law school different from other schools at a college?

US law schools are professional schools, so we are different from both undergraduate and graduate programs in several important ways. Since nearly everyone coming in to a law program has an undergraduate degree, we don’t focus on the broad educational goals that a College of Liberal Arts or College of Sciences might. At the same time, our students are not looking to develop the type of deep, specialist knowledge in a subfield that someone pursuing a Ph.D. would be. Law students are seeking a more general understanding of the law than, say, political science graduate students studying the courts would be. So the other academic units we have the most in common with in how our programs work are usually the other professional schools – medicine and veterinary medicine, and dentistry, together with the professional programs in public service, nursing, and business.

Advances in technology will surely have a huge impact. The current debate over the federal government saving meta-data from cell phones (or making private companies do it for the government) is a great example – for many people, there’s now a pretty good record of where they were and when they were there. That’s bound to have an impact. But the bigger impact is likely to come where we don’t expect it. I don’t think we’re headed to a world like the one Philip K. Dick suggested in Minority Report but big data is starting to offer some pretty amazing predictive capacity. It won’t be long before what the FBI and NSA are doing is going to be available to local police departments. It’s a big challenge for the law to keep up with all this – and it doesn’t help that the Supreme Court isn’t made up of particularly tech savvy justices.

I’m not a constitutional lawyer and so my opinion about particular issues isn’t worth much. But as someone observing the Court over several decades, I think they’ve got two big problems that they have no idea how to solve. The first is they write opinions that are often impossible to translate into the day-to-day parts of the legal system – jury instructions, clear rules, guidance on how to get things done. Instead they write multiple opinions of what strikes me as often a lot of pretty amateurish political theory and then let the lower courts try to sort out what a 4-2-3 set of opinions actually means when someone wants to know how to charge a jury. It would help if we had more justices appointed who had been practicing lawyers for long periods. Let’s get some people who know how to write contracts, draft corporate bylaws, and litigate a case sitting on the high court. I bet that will give us shorter and clearer opinions! Not unrelated is that they just don’t write many opinions any more – well under 150 a year. If they decided twice as many cases, I suspect they’d write more comprehensible – or at least shorter – opinions. I suspect most state supreme court justices could teach them how to be a lot more efficient.

I do miss helping clients. Interacting with all sorts of people and being able to help was really satisfying. That was particularly true when I was a legal aid lawyer. I also miss the speed at which people returned my phone calls when I was a law clerk to a federal district judge. It was amazing how often an assistant said that a partner had “just come in” once I mentioned I was calling for my judge.

If you could invite any 3 legal identities (living, dead, real, fictitious) to a meal who would it be?

Thomas Cromwell, St. Thomas More, and Decius Wade, the long-serving chief justice of Montana Territory. I’d invite Cromwell and St. Thomas because they battled over Henry VIII’s break with Rome, which has come down to us both in the Best Legal Movie Ever, A Man for All Seasons, which is pro-More, and Hilary Mantel’s brilliant novel, Wolf Hall, which is pro-Cromwell. I’d get them to make their respective cases over dinner to Chief Justice Wade--who was an important 19th century jurist whom I’ve written about in my scholarship and so become fascinated by--and let him decide who was right.

It's a tie between My Cousin Vinny, which has the best courtroom scenes of any movie ever, and A Man for All Seasons, for Sir Thomas More’s upbraiding of William Roper for suggesting he’d “cut down every law in England” to get at the Devil. St. Thomas responds “And when the last law was down, and the Devil turned 'round on you, where would you hide, Roper, the laws all being flat? This country is planted thick with laws, from coast to coast, Man's laws, not God's! And if you cut them down, and you're just the man to do it, do you really think you could stand upright in the winds that would blow then? Yes, I'd give the Devil benefit of law, for my own safety's sake!” Well, you just can’t get better motivation for helping make more lawyers than that!